AMHERST, NH - Amherst Fire and Merrimack received multiple calls for a fire burning in the woods on Saturday morning just before 8 am. As crews responded to several areas for reported smoke. It was apparent the wind was spreading smoke making it hard to pinpoint the actual location of the fire.
A person called from Hemlock Hill Rd when they discovered the fire burning on their property and crews responded.
Amherst Fire engines, tanker, and forestry unit worked to contain the area of the fire. Merrimack Fire provided an engine and forestry unit to assist with manpower, and water supply.
The two acre area due to dry conditions burned deep into the ground, making it difficult to extinguish.
Milford Fire was requested to cover the Amherst fire station while other crews worked at the scene of the brush fire.
Engines and tankers were used to shuttle water to the area, and hook hoses to forestry units.
As crews isolated the area of the fire, they switched to adding foam to the water supply so that it could penetrate deeply into the ground.
The crews remained on scene for several hours.
It is unknown how the fire started in the isolated area, but it is near a trail used by hikers.
©Jeffrey Hastings www.frameofmindphoto.com/news 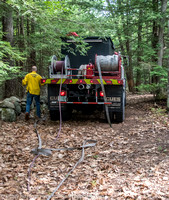