Amherst Fire eventually found the source of the fire to be a house at 5 Parkhurst Dr. at the end of a road with a long driveway and not visible from the road. A second alarm was called for mutual aid, and also additional tankers beyond the second alarm. Heavy winds were blowing at the time, fueling the fire.

Firefighters were faced with heavy fire coming through the roof, and parts of the roof collapsing. Water supply needed to be set up at a pond located approx 1/2 mile away. Hoses were run from the pond and creating a water supply to the apparatus on scene.

Amherst Fire was able to verify the homeowner and no occupants were in the house. A defensive operation was set up, and eventually an additional interior operation. The 2.5 story house has heavy fire damage and extensive water damage on the lower floor.

The fire will be investigated by NH Fire Marshal and Amherst Fire. No cause is known at this time. 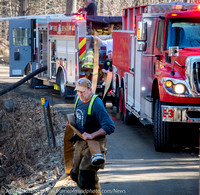 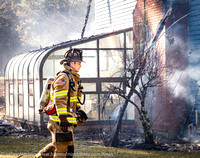 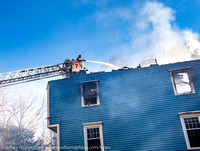