NASHUA, NH - On November 7, 2020, Nashua Fire and police responded to the end of Burke Street at 6:30 am on Saturday for reports of a pick-up truck that crashed into a box truck.

When Nashua Fire arrived they found a pick-up with the cab portion under a parked box truck. Nashua Fire, and AMR, worked to access the patient and used multiple jaws of life, hydraulic jacks, and cutting tools to try to free the occupant of the vehicle.

Boston MedFlight was requested to the scene, which arrived and landed in a parking lot adjacent to the incident. Nashua Fire worked for nearly an hour to extricate the male driver of the pick-up.

Boston MedFlight crews assisted AMR and NFR on the scene and a decision was made to transport the victim to Southern, NH Medical Center by ambulance. Boston MedFlight relocated the helicopter to the hospital landing pad.

The male victim passed away at the hospital.

The accident was investigated by Nashua Police. 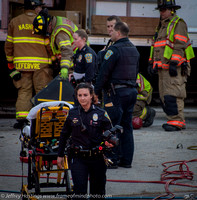 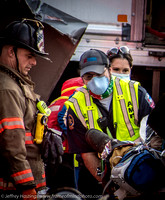