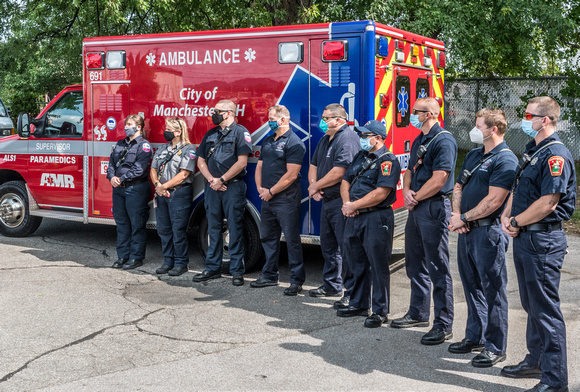 MANCHESTER, NH — A Manchester firefighter who was pulled lifeless when pulled from a fire in May is back on the job. On Monday, the firefighter had the opportunity to thank those who saved his life at an event at Manchester's AMR headquarters.

Manchester Firefighter, Craig Ferry, 53 was assigned to Engine 9 that morning. Engine 9 entered the residence under heavy smoke and heat conditions to attack the fire.

A Mayday was called, and Firefighter Ferry was just inside the doorway. He was quickly removed from the fire building by his fellow firefighters and brought outside."

As is the case with all working fires in Manchester, an AMR ambulance was dispatched on the initial fire company response. AMR ALS1, with Paramedic Supervisor Mary Woo and Paramedic Jeffrey Brule on board, was waiting close by with their gear and stretcher.

It was 10:42 a.m. when Ferry was brought out of the fire building to them. He was not breathing, had no pulse, and was blue. His firefighting gear was quickly removed, CPR was initiated, and he was placed in the ambulance.

Noting a change to his EKG, a pulse check was performed which showed that a carotid pulse
©Jeffrey Hastings
User Agreement
Cancel
Continue