Bedford, NH - Bedford Fire, Manchester Fire and Bedford Police mobilized at approx 3 am for people in the Merrimack River just North of the 293 overpass. MFD deployed two boats, put apparatus on the bridge with spotlights, and Bedford brought equipment to the boat launch under the 293 Bridge.

It was reported 3 adults and 1 child were spotted making their way to the Western shore line of the river where BFD deployed fire and ems personnel. The adults and child were brought to a waiting ambulance, and given medical attention. AMR ambulance from Manchester was requested to the scene and transported an adult female to CMC.

MFD brought other adults and children to the shore who were covered in blankets and medically evaluated.

It is believed there were a total of 9 people on the island. For unknown reasons some of them shortly after 1 am decided to return to the shore, that is when the canoe capsized.

Some of the people remained on the island and refused to leave. 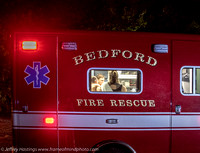 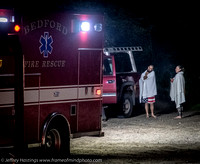