2022 CHAD Battle of the Badges Hockey

MANCHESTER, NH - The CHAD Battle of the Badges hockey game was played in Manchester Sunday at the SNHU Arena. The annual tradition raises funds for CHAD as members of the fire service battle members of law enforcement.
Fundraising by the game ended was already in excess of $210,000 and the total will continue to grow with different activities and donations coming in. Police were leading the fund raising at coming into the game but team fire is only slightly behind them. In the 14 years the game has been held, the police and fire representative have raised over $2.9 Million

Dropping the ceremonial puck was done Manchester Fire Captain Steve DesRuisseaux who was suffered severe burns in a Manchester fire while attempting to rescue occupants from a multi-unit apartment building on Dutton Street. DesRuisseax is one of our former Badges Hockey players. He represented Team Fire in 2009, 2010, 2011, 2012, 2014, and 2015, and raised over $16,000 for CHaD during those years.

Team Police won the game 5 to 3, but the true winner are the kids from CHAD who will benefit from the fundraising effort of all people involved.

NOTE - Additional photos will be provided on a link https://www.frameofmindphoto.com/chadbattleofbadges 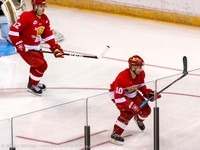