Car 1 arrived on-scene 2 minutes and 55 seconds from the time of dispatch, with
Engine 1 arriving shortly behind. On arrival, the fire was showing from a second-floor window. Occupants of
the structure were noted to be in the windows and doors on the second and third floor. Audible and
visual fire alarms were activated. The remaining Derry Fire Units were requested to the scene which
added Medic 1 and an administrative member.

Due to the occupancy of the building, a Working Fire Assignment was requested. This brought in mutual
aid resources to the scene. A fire attack was initiated, and additional fire companies simultaneously
performed search and rescue. Multiple occupants were assisted/removed from the structure.
The first e911 call was placed and received by Derry Fire Communications Center as the first fire engine
arrived on the scene.

One unit received extensive fire and smoke damage and was uninhabitable. Red Cross was requested to
the scene to assist the two adults that occupied the most damaged unit.
Thirty-one firefighters responded to this fire. Resources from Windham, Auburn, and Londonderry
responded to the scene.

Resources from Hudson, Chester, Salem and Hampstead provided station coverage.
During this incident, the Derry Fire Communications Center handled multiple other emergency requests including
medical incidents and Alarm Activations- which were handled by Mutual Aid Companies and
Call Back Staffing during the fire.

The Derry Fire Prevention Bureau determined the cause to be improper disposal of “cigarettes.”

The Derry Fire Department would like to remind the community that smoking is the leading cause of
home fire deaths in the United States. Soak cigarette butts and ashes in water before throwing them
away. Never toss hot cigarette butts or ashes in the trash can

Damage To Property:
One of the units received extensive fire and smoke damage and was uninhabitable. Common areas and
several other units received smoke and water damage.

Injuries To Fire and Non-Fire Personnel:
One civilian was evaluated by Emergency Medical Services and declined further treatment and
transport.

One firefighter was injured at this incident. The injury was related to a fall due to icy conditions.
Additional Remarks: 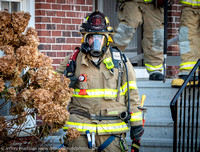 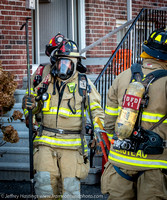