Derry, NH - DFD received a fire alarm for Watts Auto at 109 Rockingham Rd at 12:10 PM on 12/28/18. On arrival they had heavy fire showing with a large percentage of the building engulfed in fire. Workers who had been in the structure were able to self evacuate and advised arriving crews no one was in the building.

Derry fire went to a Working Fire status and mutual aid from area towns were dispatched to the scene, and for station coverage.

A defensive tactic was taken due to the heavy fire, unknown chemicals in the building and structural integrity. Fire apparatus had to relocate due to the heat melting plastic on the fire apparatus. A building on the opposite side of the street which had vinyl siding was melting, and power lines had melting insulation on them.

Londonderry Fire and Derry Fire set up master streams from their ladder trucks while ground crews attempted to extinguish the vehicles adjacent to the building which were quickly being consumed by fire. Fork trucks, and a large front end loader were also burned in the fire. Over 40 vehicles were damaged by the fire.

According to workers who had been in the building, a worker who was welding ignited an uncovered pail of gasoline. The vehicle he was working on a Honda remained on the lift and can be seen in several photos.

NH Department of Environmental Services was expected to arrive at the scene due to the large amount of haz-mat from the fire and the adjacent vehicles. Eversource disconnected power to the area buildings. 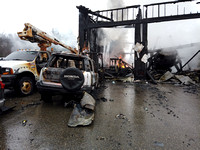