Friday a press conference was held in Concord to give updates on the progress in building out the FirstNet wireless network. The network improvements and expansion will benefit First Responders as well as the general public.

Areas of the state of New Hampshire which have never had reliable high-speed wireless data, voice and text will begin to see significant improvements. The addition of cell sites and over 100 network enhancements are in the process of being implemented in NH.

To ensure coverage, capacity and capabilities are added in the places most needed, FirstNet is working directly with state and public safety officials from across the state of NH. Currently, the “build” is ahead of schedule and has begun to provide services to first responders.

4 new cell sites are online now in Pembroke, Stoddard, Rumney, and North Hampton. Six other cell sites were added in New Hampshire last year as part of the build-out of the network.

Derry, NH Police was the first public safety agency to switch to FirstNet in the state of NH. DPD Chief Edward Garone spoke about the positive impact FirstNet has had on his department.

Chief Garone said, “Derry Police saw beneficial use from FirstNet on day one.” He explained that Pinkerton one of the largest schools in NH was causing signals to their police mobile data terminals to drop when school got out.

The huge number of students using voice, data, and text bogged down the network. 3,400 students and 400 staff potentially using their phones is a huge draw on the system. From day one of FirstNet going live there have no longer been any issues with dropped signals, slowdowns or lost coverage.

On display at the press conference, today was a FirstNet “SatColt” which is a portable vehicle that can be brought to the site of a major incident. It can be set up quickly and will provide cell service if normal towers are out of service, o 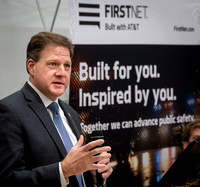 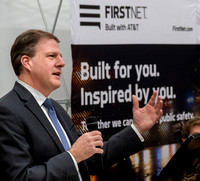 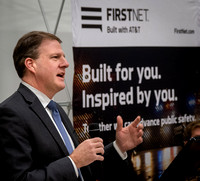