Manchester, NH - A SUV pulling a travel trailer lost control on 93 North between Exits 9N and 10. The vehicles veered across all lanes of travel, rolling over and coming to rest in the breakdown lane and lane 1 of travel. NHSP, MFD, and AMR responded. The driver and passenger were removed as well as a German Shepard. No serious injuries occurred.

Friday Northbound traffic quickly backed up for several miles. NHSP called Duval’s Towing to the scene to remove both vehicles. The importance of keeping traffic flowing was imperative.

Duval’s utilized the breakdown lane, and one lane of travel allowing all other lanes to continue to flow. The SUV was disconnected from the trailer and uprighted. The travel trailer was then uprighted in preparation of loading.

NHSP stopped traffic for 3 minutes while a low bed trailer used the cross-over and backed up to the travel trailer for loading. Once again the highway was only limited to one lane being closed. The SUV was loaded on a flatbed truck, and the trailer secured to a low bed. Duval’s Personnel removed debris and fluids and the highway was completely opened allowing the rush hour and weekend traffic to flow. 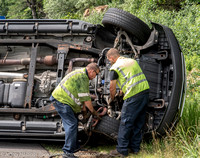