On Monday, December 16, 2019 at approximately 7:30 PM, Troopers from New Hampshire State Police Troop-A Barracks responded to a motor vehicle crash on Route 101 in the town of Epping. The crash involved two vehicles to include a commercial vehicle in tow with a tank trailer in transport with fuel.

Preliminary investigation revealed that a 2003 Volvo S60 being driven by Desiree Gulyban, age 25 of Hampton, NH had been traveling in the left travel lane westbound on Route 101. For reasons that remain under investigation the driver veered right into the right travel lane impacting a 2018 Mack truck in tow with a semi tank trailer driven by Jeffry Beaulieu, age 28 of New Boston, NH. This impact caused the Mack truck and tank trailer to rollover and come to final rest in the wood line off the right side of the roadway. Both vehicles involved sustained disabling damage; the tank trailer ruptured causing an excess of 5000 gallons of fuel to spill. The drivers were transported to Exeter Hospital and Portsmouth Regional Hospital for treatment of non-life threatening injuries.
As a result of the collision, Route 101 eastbound and westbound was closed for several hours as the investigation was conducted and HAZMAT personnel contained the spillage of the fuel. The New Hampshire State Police were assisted on scene by the Epping Police Department, Epping Fire Department, Epping Rescue, Raymond Police Department, Raymond Fire Department, Fremont Police Department, Brentwood Fire Department, Pease Fire Department, New Hampshire Department of Transportation, NH Department of Environmental Services, Clean Harbors, Alan’s Diesel and JP Noonan.
Anyone that may have further information relating to this collision is encouraged to contact Trooper Andrew Goulet of the New Hampshire State Police Troop- A at 603-679-3333.
Authority: Lieutenant John R. Hennessey
NH State Police – Troop A 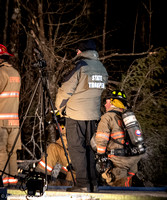 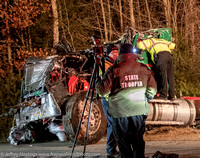 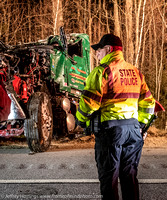