94-Year-Old Veteran Finally Receives His Purple Heart
Friday a soldier who fought in the Battle of the Bulge and was injured in the line of duty when he was hit by shrapnel from a landmine received a long-awaited Purple Heart in a ceremony held and attended by a large crowd at the Elliot Hospital
The Purple Heart award is something that has been missing from the many medals and recognitions which had been missing from the 94-year-old Francis Byrne’s collection.
Byrne served in the Army from 1943 until 1946. Byrne recalls how he was wounded in Belgium when the fellow soldier stepped on a landmine. That soldier lost his foot in the explosion, and Byrne got shrapnel in his leg. The officer who was going to document his injury was killed the next morning, so the paperwork was never filed. Byrne has shrapnel in his leg to this day.
He was diagnosed with terminal cancer several months ago and while at the hospital he had a conversation with a hospital volunteer about the missing medal and that volunteer took on a mission to get the medal. US Senator Shaheen advocated for Mr. Byrne to receive the medal.
Following a phone call with Secretary of the Army Mark Esper the Senator was able to call Byrne and give him the good news.
In a ceremony was held at the Elliot Hospital where Sergeant Major of the Army Daniel A. Dailey and Brigadier General David J. Mikolaities, The Adjutant General, New Hampshire, presented Mr. Byrne with the Purple Heart.
“He really is an American hero,” Shaheen said. “He personifies the greatest generation.”
©Jeffrey Hastings www.frameofmindphoto.com/news 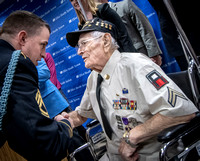