Goffstown, NH - GFD, GPD, and New Boston Fire responded to the area of 212 Goffstown Back Road for a head-on collision with a report of multiple patients. A silver SUV headed East on Goffstown Back Rd appears to have crossed into the Westbound lane striking a sedan head-on

The driver of the SUV fled the scene, running into the woods in a Northerly direction, and left his adult female passenger injured at the scene in the roadway. The occupants of the vehicle were an adult male with multiple traumatic injuries, and the CMC Trauma team was activated. The male in the car also had a child in the back seat of the car who was very shaken up and crying and was being taken for medical evaluation.

Manchester Police K9 Officer Ben Foster and his K9 Moose arrived on scene and tracked from the scene into the woods. The suspect was not found and GPD are following up on identifying the suspect.

The female passenger in the SUV had non life-threatening injuries and was transported to the hospital. 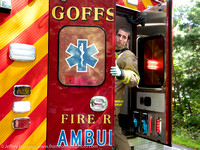