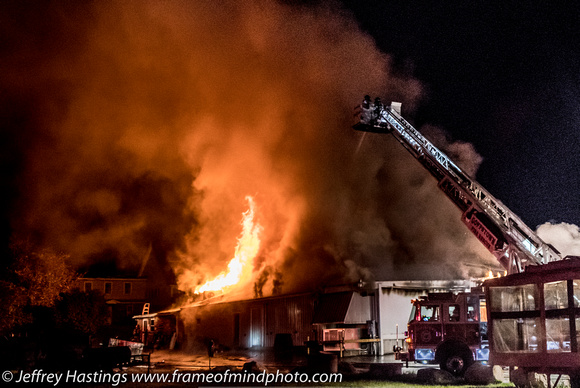 On October 6, 2016 at 5:30 a.m. a caller reported a fire at Lemay & Sons Beef, located at 116 Daniel Plummer Road. Firefighters found fire in the back of the building and smoke throughout the 6,000-square-foot structure, according to Goffstown Fire Chief Richard O’Brien.
Firefighters were able to prevent fire from spreading to a neighboring shop and a residence that the processing plant was sandwiched between.
The fire was under control about 10 a.m. and firefighters remained at the building into the afternoon to assure the fire did not spark back up.
The building appears to be a total loss, according to GFD Chief O’Brien.
A third alarm had been sounded, bringing assistance from eight communities: Manchester, Bedford, Hooksett, Litchfield, New Boston, Dunbarton, Bow and Merrimack. Crews from Londonderry and Henniker provided station coverage while the other firefighters were at the Daniel Plummer Road blaze.
The fire is under investigation, but the chief said it does not appear to be suspicious.
Lemay & Sons opened in 1963 and processes and sells local and custom meat products.
©Jeffrey Hastings/www.frameofmindphoto.com
©Jeffrey Hastings
User Agreement
Cancel
Continue