Man Falls Through Ice And Rescued By Hollis Fire

One Of Many Ice Rescues In NH Today BEWARE THIN ICE

Hollis, NH - 911 Reports came in from someone on shore who could hear a man yelling on the ice at Flints Pond near the boat ramp. Hollis Fire and Hollis Police responded to the call at approx 2:35 pm Saturday.

On arrival, they found a man in the frigid water who was approximately 300 ft off the shoreline and holding on to the ice while treading water. Hollis fire using ice rescue suits, tools, and a boat reached the man pulling him into the boat. The man had been in the water for over 20 minutes and was hypothermic. Hollis EMS removed the man's wet clothing and transported to the hospital. The man is expected to survive.

It appears the man was ice fishing just a short distance from open water when he fell in. Authorities want to remind people the ice is not safe due to the lack of cold weather. This was one of the multiple ice rescues around NH today including one in Auburn, NH, and Manchester, NH. 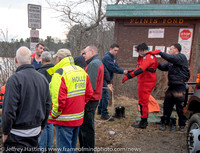