Hooksett, NH - On September 6, 2017, the Hooksett Police Department responded to 12A Dundee Ave. in Hooksett for a reported domestic disturbance. Officers made contact with the victim who stated that the suspect 21-year-old Jenness Peterson Hooksett, NH had assaulted her and threatened to shoot her dogs.
Peterson was armed with a firearm that he loaded on the scene in the victim’s presence. Peterson advised if police came he would shoot officers and then himself. The victim was able to get out of the residence and a perimeter was set up around the residence.
Manchester Police Special Operations Unit arrived to assist with the call. The Manchester Police Special Operations unit was able to have Peterson comply and placed him under arrest. At the time of his arrest, a firearm was recovered within reach of Peterson.
Peterson was charged with two counts of Domestic Violence Simple assault, two counts of simple assault and criminal threatening.
©Jeffrey Hastings/www.frameofmindphoto.com 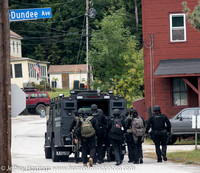