Captain Ryan S. Phaneuf, 30, assigned to the 37th Bomb Squadron at Ellsworth Air Force Base in South Dakota, formerly of Hudson, New Hampshire, died January 27th, 2020. Ryan was the co-pilot of the Bombardier E-11A that crashed in Ghazni Province, Afghanistan while serving his country on a voluntary deployment supporting Operation Freedom’s Sentinel.

Phaneuf, born in Nashua and raised in Hudson, was assigned to the 37th Bomb Squadron at Ellsworth Air Force Base in South Dakota and was co-piloting an Air Force surveillance aircraft when it crashed Jan. 27 in Ghazni province. His co-pilot of the Bombardier E-11A aircraft, 46-year-old Lt. Col. Paul K. Voss, of Yigo, Guam, was also killed.

In lieu of flowers, donations may be made to the Air Warrior Courage Foundation (AWCF). The AWCF will support the family of Captain Phaneuf in any way needed. To make a donation, go to www.AirWarriorCourage.org

Capt Phaneuf body was escorted from the church to the funeral home, led by Hudson Fire, and Hudson Police. Ryan will receive full military honors in a private burial at Arlington National Cemetery on March 9, surrounded by family and friends. 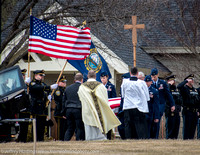