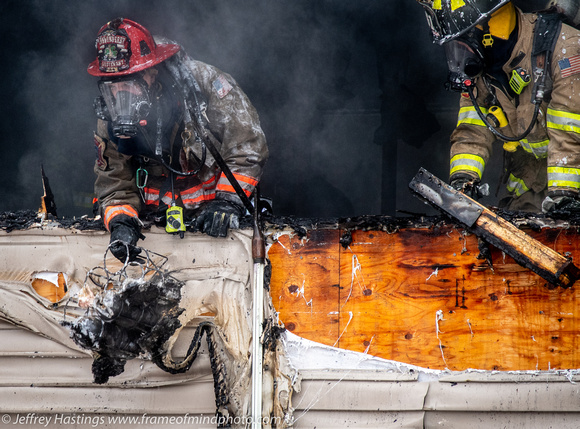 Londonderry, NH - LFD received multiple calls for a structure fire at 7 Tranquil Drive shortly after 9 am on Saturday January 20, 2020. While En route smoke was visible from a distance and when first companies arrived they had heavy fire showing from the second floor of a split level house. Initial reports were that possibly there were still occupants in the house. A working fire status was called bringing mutual aid from several area towns.

LFD quickly verified all occupants of the house had escaped safely, and crews went to work battling the fire. Crews faced extensive fire, and had to depend on tanker trucks for water. When the fire was knocked down, firefighters located a dog inside the house. Firefighters removed the dog, and performed CPR on the front lawn of the house. The dog was unable to be revived.

Fire crews were on scene for several hours overhauling and chasing hot spots. The Red Cross came to the scene to assist the homeowners. Derry CERT provided services at the scene for the firefighters and occupants of the house.

The fire will be investigated by Londonderry Fire.