Manchester held Memorial Day services Monday May 31, 2021 with a small parade on Elm Street and a ceremony at Veteran’s Park.

The city parade was unique this year due to pandemic, and participants rode in cars versus walking the parade route.

Vehicles lined up at Brookside Church on North Elm Street and traveled South to Veteran’s Park.

About 100 people gathered in the park where they honored the fallen Veterans. Memorial Day honors military personnel who lost their lives in service to their country. It also honors those veterans who no longer are with us. In contrast, Veterans Day held on November 11th honors living vets.

After the ceremony, the Vietnam Veterans monument was formally dedicated. Donated by the Disabled Veterans of America, it’s part of a larger memorial based on the symbolism of “combat crosses” marking the improvised graves of those who died on a battlefield.
In addition to those who lost their lives during the Vietnam War, the combat crosses memorial currently commemorates the dead of WWII and the War on Terror. It will include WWI and Korean War monuments in the future.
©Jeffrey Hastings www.frameofmindphoto.com/news 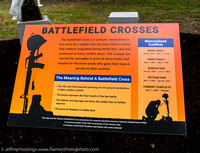