Manchester, NH - MFD received multiple calls for a fire at 42 Massabesic St at approx 2:40 pm. On arrival they had fire showing from the left side (D-Side) of the building. Truck 7 set up their truck as Rescue 1 searched the building and Engine companies went to work on the fire. Truck 1 set up on Lake Ave to reach the building due to the tight access on Massabesic St.

MFD opened up the wall, roof and ceiling to expose and extinguish the fire. According to MFD District Chief Poulin the building is known as a “Tax Payer” style building with 2 apartments above a retail space. No occupants were injured, but 6 people have been displaced by the fire. The American Red Cross was called to the scene to assist the occupants.

MFD Fire investigators are looking into the cause, but the fire appeared to be concentrated around a ventilation fan on the outside wall. 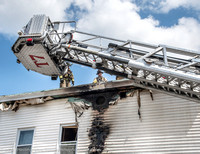 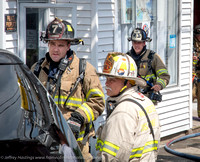 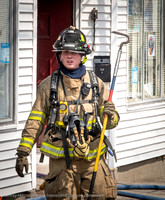 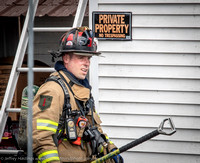