Intense Heat In Manchester On The Basketball In 3 on 3 Tournament
Nearly 100 people showed up at the Beech St basketball court for the 9th year in a row for an organized 3 on 3 basketball tournament.
The heat was high on the thermometer, but even more intense with friendly and fierce competitiveness on the court.
The tournament is run by Jim Terrero who always had help from Nick Carey until Nick passed away in 2016. When Nick passed away that is when Jim decided to name the tournament in his honor, and also take it up to the next level.
Jim who is a Manchester, NH firefighter got some financial help from Manchester Professional Firefighters IAFF 856 who have $500 in prize money. Jim chipped in the remaining $250 from his own pocket for prize money.
Manchester Police Gang Prevention unit watched all the games and even participated in a few challenges from the crowd. MPD Officer Ryan kept his end of a challenge and did 50 push ups in his full gear in the intense heat.
The tournament is split into 3 age groups, and each group who wins their division received a cash prize.
Manchester Fire came by with Engine 11, Truck 1, and Rescue 1 to show their support and bring some supplies to keep everyone cool. Engine 11 set up a water stream to cool down the players, and neighborhood kids.
At the end of the official tournament players organized a “dunk contest” with their friends holding up scores based on the performance.
©Jeffrey Hastings/www.frameofmindofphoto.com 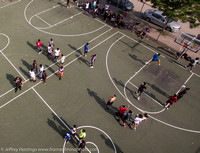 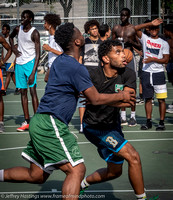 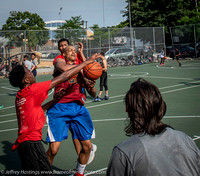 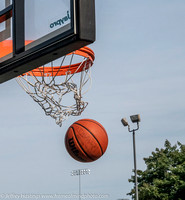 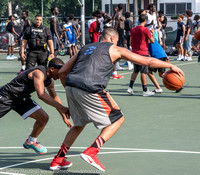 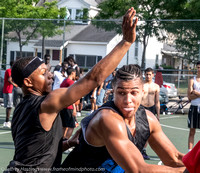 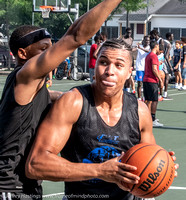 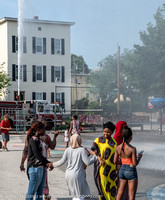