October 3, 2019 at 12:15 MFD, AMR, MPD responded to a report of an accident at the entrance to the Elliot Hospital on Tarrytown Rd, and a car into a house at Massabesic and Tarrytown. It was quickly established the two accidents were connected and that the SUV involved had traveled South on Tarrytown without braking, and slammed into the house.

Multiple AMR ambulances were added to the call as well as the MFD Building Collapse Unit. Several members of MFD went to work with the Jaws to extricate two patients from the SUV. Two young children were removed from the back seat of the SUV by AMR personnel and brought to the waiting ambulance. A trauma alert was called for a pregnant female with serious lower body injuries trapped in the passenger front seat. The driver of the SUV was also trapped and required extrication.

MFD and AMR removed the single occupant from the white vehicle at Nelson and Tarrytown and transported the patient to the Elliot.

Rescue 1 crew stabilized the building so that the vehicle could be removed. The building department deemed the building unsafe to reoccupy and 6 families were assisted by the Red Cross.

MPD cordoned off the street while they investigated the accident. 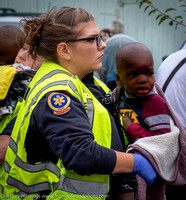 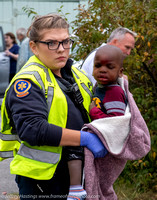 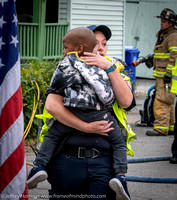 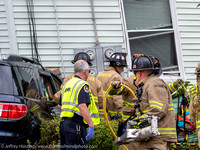