Manchester, NH
8 engines, 3 ladders, 1 rescue, 3 ambulances responded to the 3 alarm fire at 324 Hanover Street.
At 09:55am on December 12, 2017 an initial call from Manchester police indicated a fire at 324 Hanover St. Subsequent 911 calls followed reporting a building well involved prior to MFD arrival.
MFD arrived 3 minutes after the initial dispatch, upon arrival units encountered fire conditions on all three floors of an approximately 80x100 wood-frame occupied structure.First arriving personnel attempted to gain access to floors 2 and 3 to search for occupants but were hampered by heavy fire conditions.
Initial interior firefighting operations were deemed unsafe and all MFD personnel were removed from the building to begin exterior firefighting operations with aerial devices.
Later MFD units re-entered the structure to extinguish remaining fire and verify all occupants were accounted for.
All in service apparatus was utilized at the scene including a recall of all off duty members which provided upwards of 100 firefighters operating at the scene.
At the time of the press release the fire is believed to be accidental in nature and originating in the kitchen area of a first floor apartment. Further investigation including interviews with occupants are ongoing.
Balloon frame construction, heavy wind conditions contributed to rapid fire spread
One Firefighter was injured with burns to his hand. No civilians were injured.
Damage was estimated to be approx $1,000,000.
Approximately 20 people were left homeless, the Red Cross assisted them.
Incident commander District Chief Brendan Burns 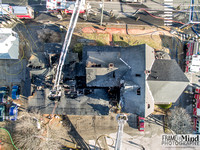 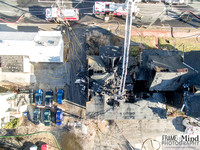 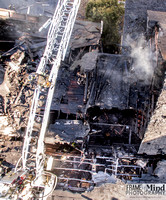 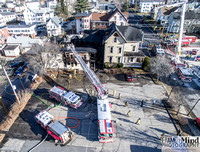