Manchester Fire responded to a reported building fire at 374 Merrimack St on April 16, 2018 at 5:25 am. Dispatch received a call of a fire at this location. Crews arrived 3 minutes after the call to find the occupied 6 family structure with the 2nd and 3rd floors heavily engulfed in fire. Initial crews advanced into the interior to search for and evacuate any trapped occupants. Additional arriving crews worked to keep the growing fire to the building of origin (which they were successful in doing). Ten minutes after arrival all crews were ordered to evacuate the building as flames had begun to consume most of the building. Fire crews were then ordered into defensive mode. All occupants self-evacuated.

Heavy winds drove the flames and smoke and MFD set up master streams to protect exposures on both sides of the building. Tightly congested inner city neighborhood added to the challenge. Truck 1 and Truck 7 had the front of the building and Bedford was the first ladder due on the second alarm. BFD took a position on Manchester Street attacking the back of the building.

The fire was brought under control at 9:40 am and was a 4th alarm equivalent. Two firefighters received injuries, one requiring transport by AMR, and one was treated at the scene.

The building was a total loss and had 6 units, and housed approx 15 people who were assisted by the American Red Cross.

The fire started in the second floor bedroom of apartment 3. The occupant stated that he was smoking in bed and dropped his cigarette. He stated that when he realized he had dropped the cigarette the side of the bed was on fire. An attempt was made to extinguish the fire but it was unsuccessful. The occupants of the fire apartment then called 911 to report the fire and went through the building evacuating residents. This fire is classified as accidental. 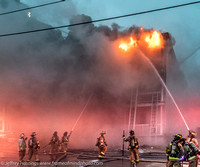 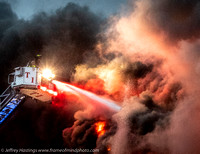 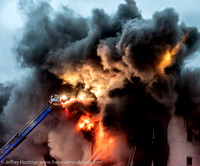 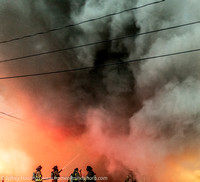