MANCHESTER, NH - Manchester fire took multiple calls Sunday for a report of a multi-unit building on fire on Prospect Street near the corner of Union.
While en route at about 10:50 a.m. firefighters could see the smoke, and fire from several blocks away. When they arrived at the scene there were reports that some of the occupants had run back into the building to get belongings.
A second alarm was requested and the intense fire was spreading to a nearby garage and adjacent house. Witnesses told us that a car near the burning building ignited and then a sound of an explosion could be heard.
Firefighters attempted to make entry into the building but the heat and intensity of flames forced them out of the building. A third alarm was requested due to the intensity of the fire and the extreme heat.
Firefighters took a defensive position fighting the fire with two master streams of water from ladder trucks. Crews also had to navigate falling power lines that were still energized.
After about one hour firefighters re-entered the building to do searches for people, but it was verified everyone had escaped safely.
The multi-unit building has three different apartments in the building. Occupants of the building watched from across the street as firefighters continued to battle the blaze. Crews were rotated out of the building about every 15 minutes to prevent heat exhaustion.
Eversource, and Liberty Utilities were summoned to the scene to take down utility lines and de-energize the live wires.
The American Red Cross came to the scene to assist the residents of the building who are all displaced, and most of their belongings destroyed.
It took several hours for the fire to be brought under control. The fire was intense when they arrived, and the roof which is slate prevented the firefighters from cutting ventilation holes to allow the fire to escape.
The fire is under investigation by Manchester Fire Marshals Office. Neighbors who reported the fire told us that they spotted the fire near some garbage cans that were next to or under a deck in the rear of the building.
A building on Prospect Street adjacent to the fire building was damaged by the fire, and siding melted on a building across the alley on the south side.
Sunday's fire was located across the street from a fatal fire on Prospect Street that killed a woman in April.
There were no injuries reported to any civilians or firefighters.
Additional information will be added as it becomes available.
©Jeffrey Hastings www.frameofmindphoto.com/news 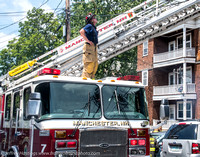 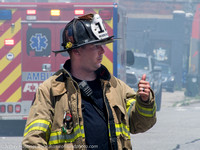