MANCHESTER, NH - On July 10, 2022 Manchester Fire responded to 361 Heavy Street for a reported building fire on Sunday and arrived to fire on the third floor.

Firefighters immediately stretched hose lines to a third-floor porch of the multi-unit building where heavy smoke and fire was visible. The fire quickly spread into the walls, ceiling and roof of the building. A second alarm was requested bringing additional personnel and apparatus to the scene, and mutual aid from surrounding cities and towns for station coverage.

AMR transported a resident to the hospital with unknown injuries. A firefighter who was being evaluated by AMR medics was walked to an ambulance for further medical evaluation.

The status of the fire was upgraded and brought all off-duty firefighters back to the city to assist at the fire. Over 100 firefighters battled the stubborn fire for several hours, and also protected adjacent structures.

Thousands of gallons of water were streamed from ladder trucks, and the ground trying to suppress the flames. At times smoke filled the neighborhood making it almost impossible to see.

Large crowds of people gathered behind police tape, and smoke billowing from the roof could be seen for miles away.

Some of the occupants from the 3-Story building gathered and watched water pouring out of windows and the front door while firefighters continued to stream water.

Eversource, Liberty Utilities, and Manchester Water Works were all requested to the scene. 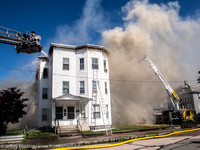 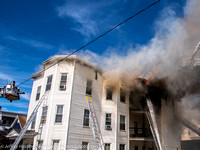 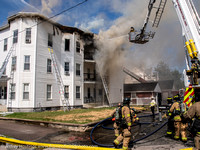 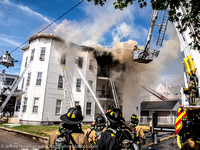 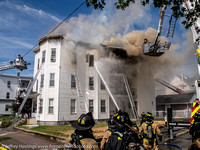 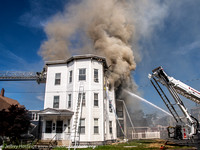 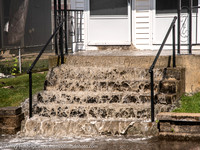