MANCHESTER, NH — On January 17, 2022 Manchester Fire received multiple calls for a multi-unit building on fire at 302 Cartier Street.
Fire crews were advised while en route there were occupants refusing to leave the building due to their cats were still in the building. Firefighters arrived at 6:34 a.m. to a two-story building with heavy fire coming from the second floor and fire threatening two adjacent multi-unit buildings. Firefighters immediately began to rescue people from the fire building, and evacuate the adjacent buildings.
As crews attempted to extinguish the flames, several residents who had evacuated the building made re-entry into the building in an attempt to retrieve their pets according to Manchester District Chief Jonathan Starr. Engine 6 reported trapped residents on the first floor and had to assist them out of the building. A second alarm was struck at 06:38.
High winds fanned flames to the extent that all personnel were ordered out of the building and defensive tactics were used to fight the fire. A third alarm was struck at 07:05. Crews were hampered by wind, precipitation and cold temperatures throughout the incident. Firefighters also had to work around live power lines that came down in the rear of the building where firefighters were working.
Residents of all the buildings gathered on the sidewalk watching firefighters battle the intense fire that had spread throughout the building. The building to the left of 302 Cartier St. began to have the siding melt due to the intense heat from the fire. The roof on the fire building began to collapse and all firefighters were ordered out of the building and took a defensive position.
Firefighters rescued four pets that were in the burning building and brought them to the residents waiting in the Holy Family Academy’s gymnasium that was used to shelter residents and warm fire crew.
Three residents were brought to the Catholic Medical Center for smoke exposure. Seven residents were displaced by the blaze and Red Cross was called in to assist.
A neighboring building sustained minor damage from exposure to the flames. The fire was brought under control at 8:02 a.m.
The building’s second floor and attic are a total loss with damage estimated at over $200,000 according to District Chief Starr.
The cause of the fire is classified as accidental and still under investigation.
1st Alarm: E6, E11, E2, E5, E10, T7, T1, R1, Car1 2nd Alarm: E7, E9,T6, ALS 2 3rd Alarm: E3, E8, AIR1 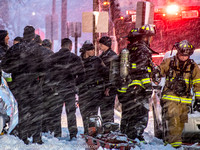 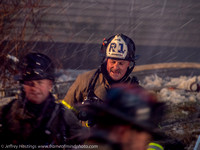 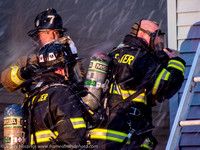 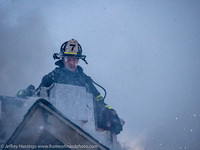 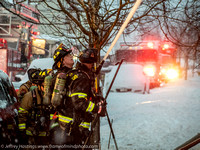 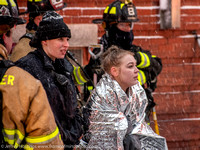 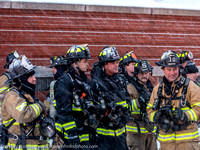 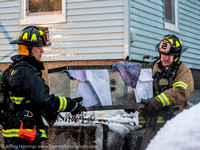 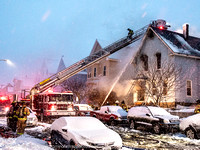 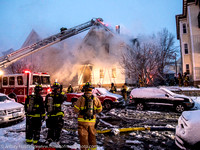 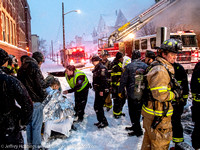 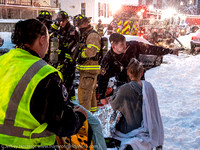 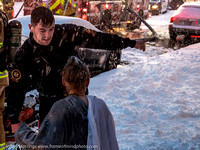 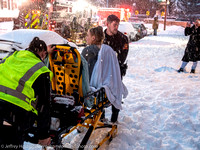 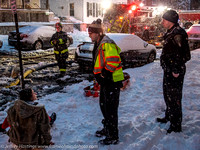 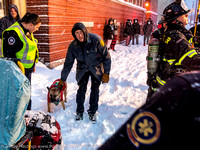 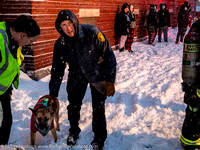 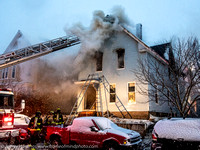