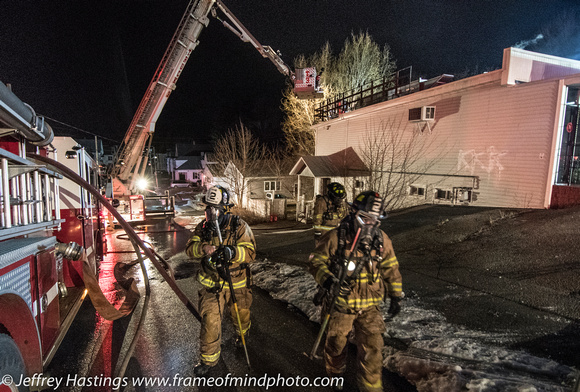 Fire Investigation Determines Arson Caused $500K In Damage
One Fire Fighter Injured While Fighting Amory Street Fire
$500,000 Damage To Amory Street Business - Fire Intentionally Set According To Investigators
After multiple agencies including MFD, MPD, and NH Fire Marshal's Office spent the day investigating it has been determined the fire was intentionally set.
On February 6, 2017 the Manchester Fire Department was notified of a fire at 519 Amory St. Upon the arrival of fire companies, smoke was encountered coming from the roof of Rodriguez Market.
The fire was reported by a passerby and the market was closed at the time of the fire. The fire went to two alarms and was brought under control in about 30 minutes.
After a complete and thorough origin and cause investigation by Manchester Fire Marshal’s office, Manchester Police Department, and NH State Fire Marshals office it was determined that this fire is incendiary in nature and was intentionally set in the main store area.
The estimated loss from the fire is approximately $500,000 and the store is not able to be occupied at this time.
One fire fighter was transported to the hospital with minor injuries and has been treated and released at this time. No civilians were injured.
This investigation is ongoing and is a joint investigation between the Manchester Fire Marshal’s Office, Manchester Police Department, and NH State Fire Marshal’s Office.
Anyone with any information regarding this fire please contact the Arson Tip Line at (603) 644-FIRE, the Crime Line at (603) 624-4040 or Deputy Fire Marshal John Reese at (603) 669-2256 ext. 3404
© Jeffrey Hastings / Frame of Mind Photo
User Agreement
Cancel
Continue