MFD responded to a reported house fire at 75 Fremont St. On their arrival they had fire showing from the front of the building and fire extended to the second floor.
According to District Chief Martineau, no one was on the first or second floor but people were home in the basement. While in the basement they heard a circuit breaker throw and smoke detectors were going off. They quickly exited the building when they smelled smoke and saw the fire when exiting.
Firefighters had to work with a very steep roof which they used ladders to access so they could cut ventilation holes. Fire crews pulled ceilings and walls to access the fire which according to Martineau traveled across the rood line.
One additional engine was requested to the scene for manpower in addition to the initial response.
A total of 5 engines, 2 ladder trucks, 1 rescue, and 1 AMR ambulance responded.
The cause of the fire was electrical in nature. The cause appears to be an overloaded extension cord. There is heavy fire smoke and water damage throughout the structure.
No firefighters or occupants were injured.
The extent of Damages: approx. $150,000.00
Time:19:27 Under Control:19:52 All Out: 21:23
©Jeffrey Hastings www.frameofmindphoto.com/news 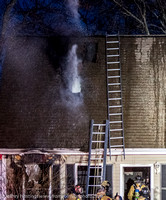 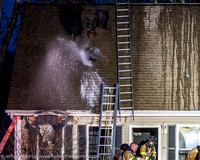 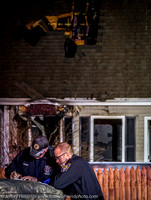