Manchester, NH - MFD Engine 3 and Engine 8 and NHSP responded to a report of a car fire on 93 South just South of the 293 merge. On arrival they had a Toyota passenger car fully engulfed in fire. Engine 8 stretched a line and extinguished the fire while Engine 3 blocked.

According to witnesses the car ran over a mattress in the roadway and began to smoke when the mattress caught on fire. The car was a total loss, no one was injured. 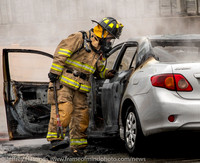