MFD received multiple calls on 10/6/19 at 3:44am reporting a fire in a duplex at the corner of Irwin Dr. and Merrow St.

When Engine 5 arrived they had heavy fire coming out out of windows on the A and C sides of the building.
Fire crews made entry into the building and confirmed everyone was out of both sides of the duplex.

Due to the heavy fire a power line which remained live dropped from the pole creating a hazard, and Eversource was called to the scene.

There are two addresses for the building, the left side is 32 Merrow St and the right side is 163 Irwin Dr.

The fire is under investigation, however, it appears the fire started on the side which was vacant. The fire was brought under control at 4:39 am 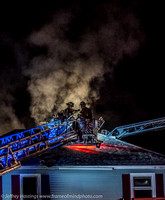