Manchester, NH - MFD received calls of a van fire next to a building at Prescott and Hall Street (the rear of 640 Harvard St.) Upon arrival Engine 7 had a fully engulfed van which as extending to the building. The full box was dispatched due to the scope of the fire and size of the building.

The van was occupied by homeless people and one man escaped the fire and was burned and transported to the hospital by AMR Ambulance. There was immediate concern based on information there may be more people in the van. When the fire was knocked down the van was searched and no one else was found.

The building once housed the Genest Bakery and is currently partially occupied. The City of Manchester took possession of the building recently due to back taxes.

According to District Chief Martineau the fire was limited to the unoccupied part of the building. The condition of the patient is unknown at this time. 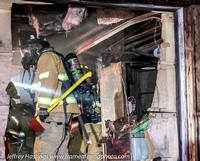