Manchester, NH - MFD responded to a reported structure fire at 9:50 am on Sunday. While responding a call came in from an off duty fire fighter reporting fire through the roof of 836 Candia Rd.

On arrival Engine 8 had heavy fire and smoke coming from a 1 1/2 story wood frame structure. The structure was occupied by a welding business, and auto service garage. Responding units had to bring water supply from Candia Rd to the back of the parking lot.

District Chief Al Poulin ordered all personnel out of the building due to partial collapse of the building, and the dangerous conditions. A defensive operation was set up using streams of water from two ladder trucks.

Smoke could be seen from miles away from the scene. Exit 6 from 93 northbound and Candia Rd were closed for a period of time due to hoses being run across the roadway.

The cause/origin of the fire is under investigation by the Manchester Fire Marshals Office.

The building is structurally unsafe and appears to be a total loss. Crews remained on scene for several hours chasing hot spots. 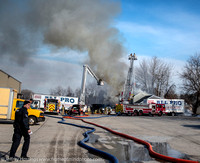 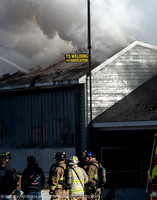