Manchester, NH - 911 calls came in for a fire on the front porch of 279 Silver St at 9:08 am Wednesday morning. Three minutes later the first MFD unit arrived on the scene and reported a fire on the first floor of the multiple family dwelling. A Subsequent 911 call from an occupant inside the structure reported he was on the second floor and unable to exit due to the heavy smoke condition. MFD fire fighters immediately located him and assisted in safely getting him out of the building

Another caller reported a female on the front porch of the structure pouring a liquid from a gas can and igniting it just before the building caught fire. Other witnesses gave a similar described a female walking away from the scene carrying a gas can, and a white rag or towel. She possibly fled the scene on foot and then into a vehicle.

Manchester Fire has labeled the fire as suspicious and is working with MPD Detectives to investigate. A photo of a woman captured on video leaving the area at the time of the fire was distributed to the public to help identity here. Anyone with information regarding the fire should contact the Manchester Fire Dept at 603-669-2256 or the Manchester Police Department, or contact Detective Scott Ardita at 603-792-5506 and reference MPD Case # 19-1451.

Four families are being assisted by the Red Cross as the building will be temporarily uninhabitable. Fire damage limited to the first floor however smoke damage sustained throughout the structure. No injuries to civilians or firefighters. 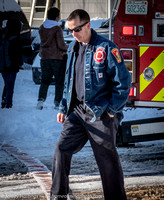 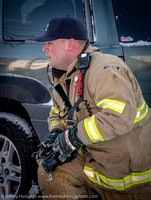 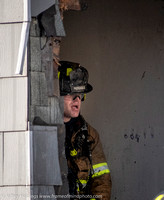 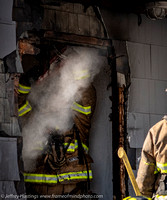 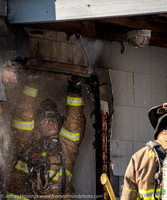