Manchester NH - MFD responded to an alarm at 200 Hanover St the Hugh Gallen Building which has 100 apartments and approx 300 residents. Upon arrival they had heavy smoke on the first floor on the East end. MFD made entry and the sprinklers were flowing but had an apartment fire.

The building area of the fire was filled with smoke and several elderly residents required evacuation. District Chief Michaels requested a second alarm for manpower and 4 AMR ALS ambulances. Manchester Transit was requested to bring a bus to the scene to shelter the occupants from the weather.

The fire was extinguished primarily by the sprinklers but several parts of the building had to have smoke ejected, and due to sprinklers several suffered water damage. Initial information according to Chief Goonan points to careless disposal of smoking materials.

Several people who were evacuated had to be medically checked out by AMR. The Male who was in the apartment with the fire was transported with unknown injuries.

According to MFD Chief Goonan approx 6 to 8 apartments would not be able to be reoccupied. ©Jeffrey Hastings / www.frameofmindphoto.com 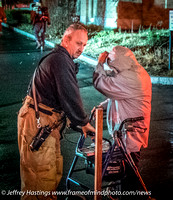 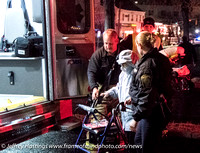