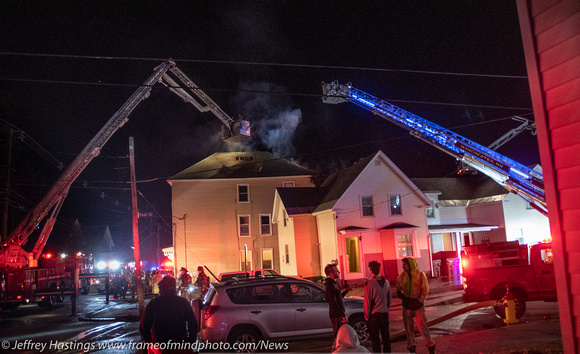 Manchester, NH - MFD responded to 30-32 Russell St at 3:03 am for a structure fire. At 3:07 am on arrival MFD had heavy fire on the back porches of a 3 story occupied building. The fire building had exposure to a building just a few feet away. A second alarm was called as T1, and T7 (operating T3) set up protecting the exposure on the B side, as companies searched and evacuated the fully occupied building.

The fire was brought under control at 4:02 AM. Some exterior damage was caused to the adjacent building on Pearl St, and a vehicle parked in the driveway of the fire building.

MFD Fire Marshal Office determined the fire was caused by improper disposal of smoking material on the third floor porch of the house. Cy the Accelerant detecting K9 was utilized at the scene.

MFD District Chief Michael was command of the incident. No firefighters or civilians were injured. Occupants of the building were assisted by the Red Cross in finding alternative living accommodations.