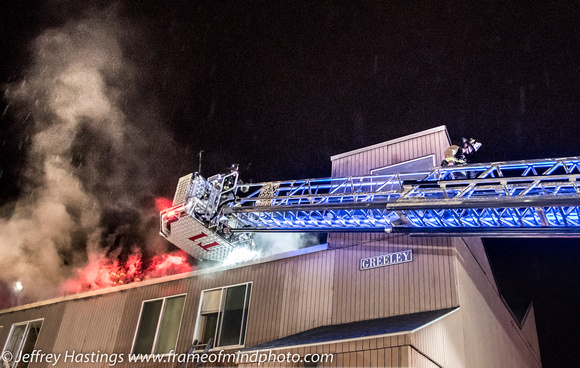 MFD responded to an alarm activation at SNHU Greeley Hall at 7:45 PM. While in route 911 updated that there was smoke coming from the building and the box was filled out.

Upon arrival units had smoke showing from the second and third floors. The building was being self evacuated, and MFD entered to search the building for occupants and locate the fire.

The fire appeared to be in the ceiling between floors two and three, and in the wall.

MFD went to a second alarm for manpower. Firefighters used hooks, and saws to open up the walls, ceilings, and floors.

The sprinkler system in the building was activated but was not being effective because the fire was in the ceiling and walls.

MFD opened up the roof and walls using Truck 1 for access. The fire was brought under control in approx 1 hour. MFD had extensive overhaul, and used foam to saturate the fire area.

The fire is under investigation but appears to be electrical in origin.