The house which has been abandoned for several years has been the broken into several times by squatters. MFD completed a search of the building and then went to defensive mode due to the dangerous stability of the structure.

MFD Truck 7 and Truck 1 set up master streams while other units set up in the ground. Engine 8 who was the RIT team helped keep water from flooding the adjacent building. Temperatures which were well below freezing and 2 degree wind chill factor added to the challenge of fighting the fire.

The fire was brought under control by 3:46 pm. The burnt structure continued to have hot spots and was unsafe so a decision was made to bring an excavator in from Manchester DPW. The excavator removed parts of the barn so that investigators could search the area where the fire started. MFD also wanted be confident no one was had been trapped in the building at the time of the fire.

The building was knocked to the ground and Truck 1 used a master stream to put significant water on the debris to prevent any ignition.

District Chief Hank Martineau was in command of the incident. 5 engines, 2 trucks, 1 rescue and 1 AMR ALS responded to the call. No injuries were reported to any fire fighters or civilians.

The cause of the fire is under investigation by MFD Fire Investigators. 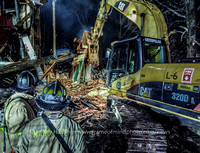