City of Manchester, NH Fire Department pulled up to smoke and heavy fire in the vicinity of 370 Amory Street. The abandoned building which has been unoccupied for nearly 10 years was quickly becoming engulfed in flames.

MFD pulled all crews from the fire building beginning a defensive attack and protecting the two adjacent buildings which had siding melting because of the intense heat.

Also challenging adding danger the power lines in the front of the building caught fire and were at risk of falling on to Fire Fighters.

According to witness accounts they saw several teen age males running from the building. After investigators interviewed witnesses, 2 16 year olds were taken in to custody and charged with arson. 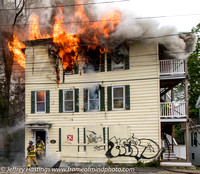 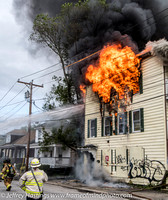 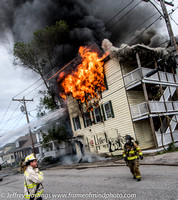