According to NHSP Lt Bryan Trask NHSP, Merrimack Fire, and NHDOT responded to the Exit 10 off-ramp of the Evertt Turnpike at approx 11:00 am Tuesday.
Upon arrival, they had a single vehicle which left the roadway striking a light pole and a large tree. The vehicles roof and engine compartment caught fire. Motorists and responders used fire extinguishers to attempt to extinguish the fire.
When the fire was extinguished it was determined the woman was deceased. The NH Medical Examiners Office responded, as well as a local funeral home to remove the victim.
An accident investigation revealed that a 2009 Toyota Camry operated by a Lindsey Catalino age 25 of Nashua, NH, was traveling northbound on the F.E. Everett Turnpike and lost control of her vehicle impacting a light post and a tree off the right side of the roadway.
The impact with the tree caused fatal injuries to Catalino and she was pronounced deceased on scene.
The cause of the crash remains under investigation and anyone with information regarding this incident is encouraged to contact Trooper First Class Kieran Fagan. [email protected] or 603-672-3333.
The accident is under investigation at this time. No skid marks or correction marks were present on the pavement. It is unknown if a medical incident was possibly involved.
©Jeffrey Hastings/www.frameofmindphoto.com/news 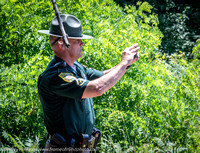