On Thursday May 31, 2018 at 12:34 PM the Merrimack Fire Department was dispatched to 88 Amherst Road for a reported structure fire.

Merrimack Engines 1 and 2, Ladder 1, Fire Chief Currier, Assistant Chiefs Pierson and Borneman and Fire Marshal Manuele responded. Several calls were received from neighbors stating there was smoke coming from the windows and eaves of the home, so Lieutenant Bannister requested a working fire alarm be sounded which dispatched Merrimack Engine 3 and called in mutual aid from Nashua and Manchester Merrimack Police officers arrived on scene and confirmed smoke was showing.

The first arriving crews began an immediate entry into the house, as there were reports of someone possibly being inside. Firefighters forced their way into the home and began searching for possible victims, as well as the seat of the fire. During the search no victims were found, however an unconscious cat was rescued and brought outside. The cat was cooled with water and revived with oxygen. Family brought the cat to Naticook Animal Hospital for further care. Unfortunately a pet tortoise was not able to be saved.

A Nashua Engine and Ladder arrived on scene to assist. An engine from Manchester and off duty Merrimack Fire personnel covered Station 1 during the fire. An aggressive interior attack by Engine 1 and 2’s crews under the command of Captain Marsella was able to fully extinguish the fire within 30 minutes of arrival.

The fire was declared under control at 1:09 PM. An extensive overhaul and salvage operation was then conducted. Damage to the home was contained to heavy smoke damage throughout, and some fire damage to the living room and interior contents. The residents will be unable to stay in the home until repairs can be completed.

All fire personnel cleared the scene by 1:53 PM. One Merrimack firefighter received non-life threatening injuries and was treated and transported by Amherst Ambulance. Merrimack Police closed Amherst Road for the duration of the incident.

The cause of the fire was undetermined at this time but is believed to be accidental. The Merrimack Fire Marshal is continuing to investigate. 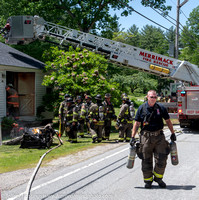 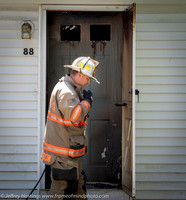 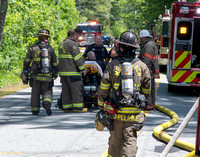