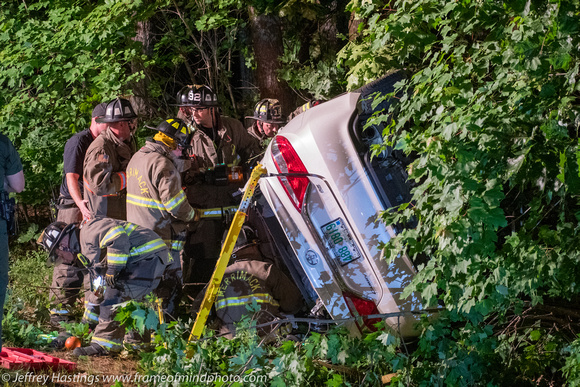 MERRIMACK, NH — On July 21, 2021 Merrimack police, fire, and New Hampshire State Police responded to a report of a single-vehicle off the road into the tree line on Monday. The accident was located on the F.E. Everett Turnpike northbound at mile marker 14.2

First arriving units at about 12:25 a.m. found a vehicle with heavy damage against several trees with the driver pinned in the vehicle. State police shut down the highway so that additional apparatus from Merrimack firefighters could set up to extricate the patient.

Fire crews began the extrication process and due to the extent of the injuries requested a medical helicopter to land on the highway. DHART medical helicopter was dispatched as crews continued to treat the patient and attempt to extricate him.

Parts of the roof, doors, and windows were removed from the vehicle. Medics worked on the patient while he was pinned in the car and attempted to stabilize his medical condition.

DHART helicopter flew over the landing zone set up on the highway, NHSP shut down the southbound lanes of the turnpike. After several flyovers, the helicopter advised they could not land on the highway. A second landing zone was set up in a parking lot near the Homestead Restaurant on DW Highway.

The patient was extricated after nearly an hour of crews using various tools and techniques to remove the victim from the vehicle.

Merrimack Fire Ambulance transported the patient to the helicopter landing zone and he was flown to a Boston Hospital about 30 minutes after arriving at the landing zone. The patient had serious injuries, and his condition is unknown.

State Police have identified the victim of the accident as Adrian Vintila, 28 of Laconia. Vintila suffered serious injuries and was transported by medical helicopter to the Lahey Clinic in Burlington, MA.