Merrimack, NH - A customer entering Buckley’s Cafe on DW Highway at 6:25 am Saturday noticed fire coming from the power line where it attaches to the building. Merrimack Fire Rescue which is literally next door to the building was notified and on scene immediately. The units had a power line burning, the building was evacuated and the power was shut off.
Eversource was notified and immediately responded to the scene, and shut off power from the utility pole to the building. After inspection it was discovered there was an issue with with the supply line, and it was repaired.
Buckley’s cafe was able to reopen due to the limited amount of damage with the quick actions of MFR and Eversource.
Buckley’s supplied the responding crews with breakfast sandwiches as a token of appreciation.
©Jeffrey Hastings/www.frameofmindphoto.com/news 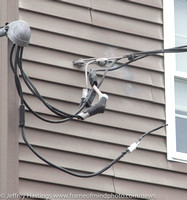