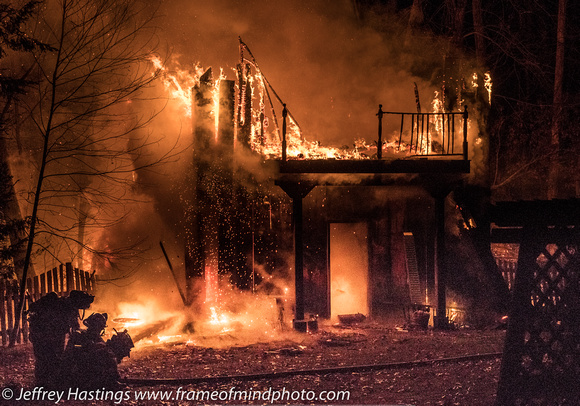 November 30, 2017 at 12:24 AM the Merrimack Fire Department was dispatched to 212 Amherst Road for a reported structure fire called in by a passerby. Merrimack Engines 1 and 2, Ambulance 1, Fire Chief Currier, Assistant Fire Chief Borneman and Fire Marshal Manuele responded.

While fire units were enroute further information from Merrimack Police units and neighbors calling 911 indicated that the fire was actually in a 2 story barn located behind 9 Mason Road, and that the structure was fully engulfed in flames. Captain Gagne in command of Engine 1 requested that a working fire dispatch be transmitted, which would bring mutual aid from Nashua.

First arriving crews on Engine 2 saw heavy smoke and fire while still on Amherst Road. Upon arrival Chief Currier requested a mutual aid engine from Amherst and that a Nashua Ladder and Engine also report to the scene. The homeowners confirmed that there was no one in the barn, nor were there any animals as the barn was being used as a workshop. Engine 2’s crew began attacking the fire from the exterior of the building due to the entire building being fully engulfed in fire.

Engine 1 arrived and began laying 4” water supply hose to the nearest hydrant located on Amherst Road. Due to the water needing to be pumped uphill Merrimack Engine 3 was assigned to pump water from the hydrant. A Nashua Engine and Ladder and an Amherst Engine arrived on scene and began assisting Merrimack crews with attacking the fire.

Suppression crews were able to knock down the bulk of the fire by 1:00 AM. The fire was declared under control at 1:15 AM and then crews conducted an extensive overhaul operation. There were no injuries reported.

The barn was declared to be a total loss. All units were clear of the scene by 3:30 AM.

The cause of the fire is under investigation by the Merrimack Fire Marshal.