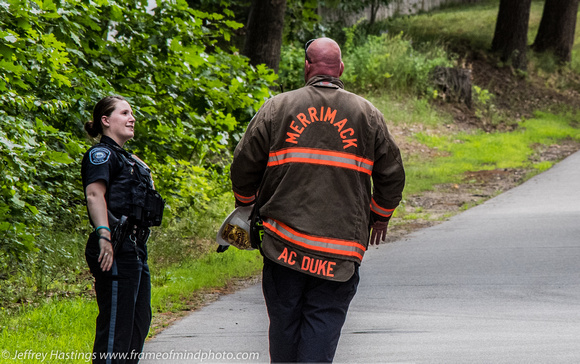 MERRIMACK, NH - Merrimack Fire and Police responded to a call for a gas leak in the area of Killian Court on July 3, 2020 at 2:55 pm. Merrimack Police arrived on scene quickly as the location is directly behind police headquarters. MPD found a vehicle which had driven over an in-ground 1,000 propane tank which had ruptured from the tank.

Merrimack Fire and Police closed Hillside Terrace running hoses from hydrants to put water on the active leak. The propane vendor was called to the scene and fire crews evacuated the residents of the condominium complex, moving them to a safe location.

When the vehicle drove over the underground propane tank is sheared off two valves according to MFR Acting Chief Matthew Duke. He said the propane crews arrived on scene and began excavating the area around the broken valves. After about 2 hours the leak was stopped by the repair made to the valves.

After the leak was repaired the residents were able to begin to return to their condominiums.

The road remained closed while apparatus rolled up hoses, and removed equipment.

Merrimack Police are investigating the accident.

No one was injured in the incident.