November, 19, 2019 - Merrimack, NH - Merrimack Fire responded to 243 DW Highway to check conditions after a call came in for a chemical incident. It was quickly discovered that an item received had been shipped to use in the manufacturing process was “not acting normally”. People in the area began to have symptoms of being lightheaded, nauseous, and headaches. The building was evacuated.

Nashua Fire Special Hazards unit was consulted and requested to the scene. NFR provided shelter for employees affected to change clothes, and get evaluated. The Hazards team worked to identify the chemical and the contents. Adding to the difficulty the material in question came with documentation which was in Spanish and needed to be translated.

A total of 53 were treated and evaluated at the scene according to Merrimack Fire Chief Currier. Nashua teams wearing protective gear entered the area where the chemical was being used and sealed off the area. The area will be cordoned off and will require the company to bring in a specialized company cleaning up chemicals. 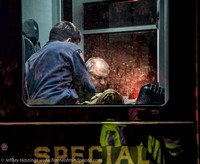