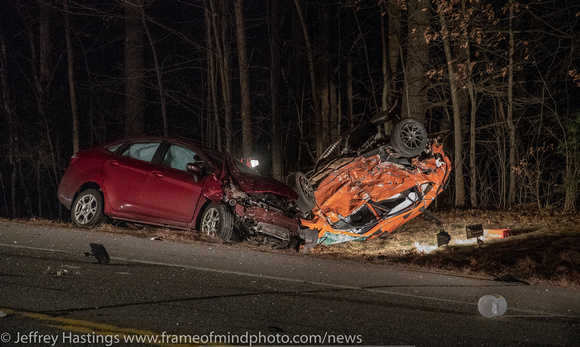 MILFORD, NH — Speed may have caused a three-vehicle crash that killed a Wilton woman and injured three others Wednesday night in Milford, according to authorities.
Cheryl Ferrell, 57, died at the scene of the accident around 7:15 p.m. on Route 101 between the Osgood Road and Perry Road overpasses.
Police said Ferrell was driving a 2015 Subaru Crosstrek and traveling west at the time of the crash. Police are still investigating how all three vehicles collided, including a 2008 Volkswagen Jetta with two male juvenile occupants that was also traveling west and a 2015 Ford Fiesta driven by Andrew Dwyer, 23, of Nashua, that was traveling east.
Police said that Dwyer and the two juveniles were transported to hospitals in Nashua with minor injuries. They did not release the names of the juvenile occupants in the Volkswagen.
“It does appear that speed was a factor in this crash,” police said in a release, adding that stretch of Route 101 is a straight and level roadway.
Authorities did not indicate which vehicle may have been speeding.
A portion of Route 101 was closed for several hours on Wednesday night while police investigated. The Milford Technical Accident Reconstruction team is still investigating the details of the crash; the exact cause remains under investigation.
© Jeffrey Hastings for useage contact [email protected]
User Agreement
Cancel
Continue