MILFORD, NH — A Nashua Transit bus slammed into a daycare on Elm Street in Milford, causing concrete to fall near children who just went down for a nap.
No children or daycare workers were injured. Milford Police Captain Craig Frye said the driver and one passenger were taken to the hospital. A second passenger refused medical treatment.
It appeared the driver suffered some a medical incident, drove off the road and struck the side of the occupied daycare.
According to Milford Fire Chief Ken Flaherty said the daycare was occupied, with five children who had just gone down for a nap a few feet from where the concrete foundation fell into the building. Before napping, the children were having lunch in the same area the bus came through.
Flaherty said if the coronavirus was not limiting occupancy at the daycare, there would have been some 20 children in the area the cement and debris came down.
The daycare suffered major structural damage and the bus was towed from the scene.
The bus will be expected for mechanical issues and the video on the bus will be examined by the investigators. 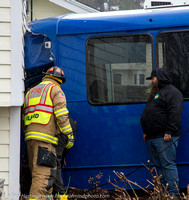