Milford NH - Two cars collided in what appears to be a head on collission on route 101 on the over pass of Route 13. Milford Fire requested two medic helicopters to the scene, but then cancelled one when one of the drivers was non-viable. The second patient was extricated after approx 25 minutes and transported via DHART med-vac to an unknown hospital. The person transported had life threatening injuries and was in critical condition.

The road way was closed in both Easterly and Westerly directions. Traffic was able to be diverted down the off ramps for Route 13 and re-enter 101.

The accident is being investigated by Milford Police (Not NHSP) and their tactical accident reconstruction unit was on scene. One vehicle was up on the guard rail which is the vehicle the person was extricated from. The other unknown type vehicle was covered in a blue tarp, and a tarp also was draped over the bridge to block the view of people passing by.
©Jeffrey Hastings / www.frameofmindphoto.com 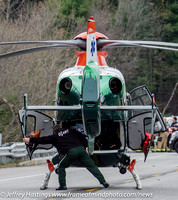 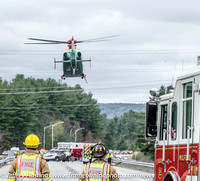 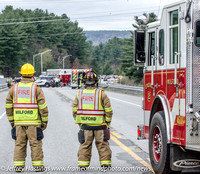 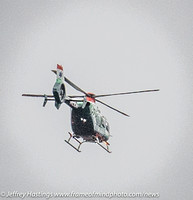