MANCHESTER, NH — On May 26, 2021 a standoff with an armed man who allegedly fired multiple rounds at U.S. Marshals, and Manchester police has ended after more than 8 hours.

Manchester police lost communication with the man after communicating for an extended time with him. Police launched irritants into the house, and the man did not respond or exit the house.

Police say they eventually made entry into the house using a drone which searched the house and eventually found the man in the basement. It appears that the man died of a self-inflicted gunshot wound.

Wednesday at about 7:45 a.m. U.S. Marshals went to 1454 Union St. to serve a federal warrant. Upon arrival, shots were fired from inside the residence.

Manchester police immediately responded. A perimeter was set up, residents were told to shelter in place, and surrounding roads were shut down. Four people exited the home and were safely removed from the area.

Crisis Negotiators were able to make contact with an individual inside via cell phone. They talked with the man for several hours, but later lost contact with him.

The drone located a deceased male in the basement. The medical examiner was called and the cause of death is pending an autopsy. It does appear that he suffered a self-inflicted gunshot wound, officials said.

The house was cleared by law enforcement and no one else was found to be inside.

The Medical Examiner was called and the cause of death is pending an autopsy.

“This was a tense situation from the beginning, but due to the quick response of initial patrol units and the subsequent response of the SWAT team, we were able to contain this very quickly. It ultimately allowed us to bring it to a resolution," Chief Allen Aldenberg said. “We appreciate the support and patience of the public, we understand the inconvenience this caused but we had to take every precaution to keep the community safe. We are also thankful for the collaboration with our law enforcement partners in this mat 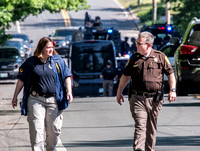 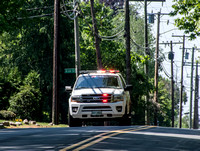